Editorial Note: We are pleased to bring you the following exciting editorial from our Assistant Editor, Dr Brian Laslie. Brian brings us news about the new air power book series that he is editing for the University Press of Kentucky. This is a significant development and one we at From Balloons to Drones wholeheartedly support and encourage, though we are, of course biased. We will be reviewing the books from this series and due course, and we look forward to seeing what future releases come from this series.

If you have followed From Balloons to Drones for the past couple of years, you know that book reviews are one of our favourite things to do on the site. There are a lot of great presses out there doing new, innovative, and exciting work on the history of air power. University Press of Kansas recently released Flying Against Fate: Superstition and Allied Aircrews in World War II by S.P. MacKenzie and the Naval Institute Press continues to turn out quality work in various series most recently Winged Brothers, Flight Risk, and Admiral John S. McCain, all of which are staring at me from my ‘to be read’ bookshelf. You have probably also noticed the change in winds towards reviewing space-related themes here so a shout out to both the University Press of Florida and University of Nebraska Press, please go check out the great work by all these phenomenal academic presses who keep moving our knowledge of air and space power forward.

Also, if you have followed along with From Balloons to Drones or myself, you know that if I had to pick a favourite university press, it would be the University Press of Kentucky (UPK). I am, of course, biased as they published both of my books. So, I was honoured when UPK approached me last year to be the editor on a new series, ‘Aviation and Air Power Series.’ In the past year, I have been hard at work with the great staff at the press, and we already have some great projects in the pipeline. Our first two titles: Lectures of the Air Corps Tactical School and Biplanes at War just hit the shelves. Go order yourself some copies… 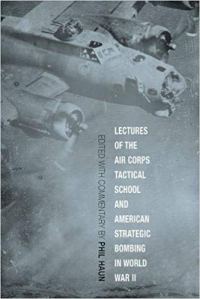 Last year, before the 2018 meeting of the Society of Military Historians I did some digging back through UPK’s backlist looking for some (more) books on aviation and air power. I also made some phone calls to staff and faculty members at the USAF Air Command and Staff College, the United States Military Academy and of course, up at the US Air Force Academy and a few other schools regarding UPK’s scholarship in the field of Military History, but particularly in aviation and air power.

To go through just a few of these titles you come up with, my first book, The Air Force Way of War: U.S. Tactics and Training After Vietnam which was selected for both the USAF Chief of Staff’s Reading List as well as the Royal Air Force’s Chief of the Air Staff’s reading list. This is an important point. Two senior air force leaders found enough merit in the book that they made it recommended reading to their services (trust me, I was surprised). It is also on the required reading list for all Air Force majors (and sister service officers) selected to attend the Air Command and Staff College. That means that 600 majors every year are exposed to this work (and I apologise to each and every one of them).

Some of the other air power books UPK published includes: Why Air Forces Fail: The Anatomy of Defeat edited by Robin Higham and Stephen J. Harris which was also on the USAF CSAF reading list in 2008. Being selected to a service chief’s reading list is no small feat. It not only increases sales but exposes the ideas in the work to an entire generation of military professionals. These books are always stocked at military post exchanges and can be found in every base library across the globe. That is an impactful scholarship.

I know that Robert Farley’s Grounded: The Case for Abolishing the Air Force was widely discussed in the highest circles of the US Air Force a few years ago. Expanding the Envelope: Flight Research at NACA and NASA by Michael Gorn was the winner of the 2004 Gardner-Lasser Aerospace History Literature Award given by the American Institute of Aeronautics and Astronautics. There is also Dan Herrington’s Berlin on the Brink: The Blockade, The Airlift, and the Early Cold War and Higham and Mark Parillo’s edited volume The Influence of Airpower Upon History: Statesmanship, Foreign Policy, and Diplomacy since 1903. This is all to say that UPK press military scholarship has a global presence and a global impact.

In this new series, each volume will bring together leading historians and emerging scholarship in the fields of military aviation and air power history. I wanted a broad-based look at aerial battles, air warfare, and campaigns from the First World War through modern air operations, but also wanted works on the heritage, technology, and culture particular to the air arm. I am currently looking for biographies of leading (and overlooked) figures. The series also seeks not only to cover the American Air Force, Army, and Naval aviation, but also other world powers and their approaches to the history and study of the air arm.

There is a straightforward reason for starting an entirely new series that focuses exclusively on air power and aviation. Over one-hundred years past the development of the aeroplane as a means of transportation and a domain of war and we still struggle to fit the aircraft contextually into the study of military history. What I hope to do with this series is broaden our understanding of air power and its contributions to conflict.

How would you like to join this list? Do you have an air power related manuscript that you’d like us to consider for publication? A worthy Master’s or Doctoral dissertation that you think might make a good manuscript? We are looking for new air power scholarship…

Dr Brian Laslie is an Air Force Historian and currently the Deputy Command Historian at North American Aerospace Defense Command (NORAD) and the United States Northern Command. A 2001 graduate of The Citadel and a historian of air power studies, he received his PhD from Kansas State University in 2013. His first book The Air Force Way of War (2015) was selected for the Chief of Staff of the Air Force’s and the Royal Air Force’s Chief of the Air Staff professional reading lists. His recently published Architect of Air Power: General Laurence S. Kuter and the Birth of the US Air Force. He lives in Colorado Springs. He can be found on Twitter at @BrianLaslie.