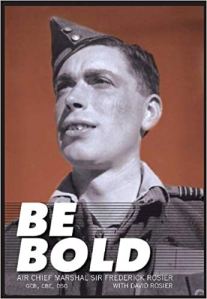 Air Chief Marshal Sir Frederick Rosier had a long and distinguished career in the Royal Air Force (RAF). Granted a short service commission in 1935 (p. 19), he was the last Air Officer Commander-in-Chief (AOC-in-C) of RAF Fighter Command before it merged with Bomber Command in 1968 to form Strike Command. This autobiography, written with his son David who finished it after his father’s death in 1998 (p. 10), highlights many interesting facets of service in the RAF during two pivotal events in twentieth-century history; the Second World War and the Cold War. Concerning the former, this book gives us a view from a rising junior officer who served in both frontline and staff positions during the Second World War. Regarding the latter, we have a view of the Cold War and its threats from the perspective of an officer rising to senior command. As such, it illustrates many of the challenges and ambiguities associated with senior leadership.

The genres of autobiographies and memoirs and the associated field of biography remain an ever popular and vital element of military history. While it is often easy to criticise biographers of hagiography and autobiographers of viewing the past through the prism of hindsight, they do offer valuable insight to the past. Indeed, biographies and memoirs/autobiographies are arguably the most commercially viable method of making military history accessible to wider audiences. Additionally, biographies and memoirs/autobiographies are an essential source for historians seeking to understand the period they study. More specifically, with regards to the RAF, there are too few accounts either by or about senior officers who served during the Cold War period. Indeed, for officers who served during the Cold War, we are unlikely to see the type of voluminous personal papers that we see with such former senior officers as Marshal of the Royal Air Force Viscount Trenchard and Admiral of the Fleet Earl Mountbatten. As such, it has become more critical that the service experience of these men be recorded. In this vein, memoirs and autobiographies offer a useful adjunct to the historians’ toolkit as they, just like oral history, can offer a personal view on many of the events that we read about in official archival sources. Thus, Rosier’s account is much welcomed.

Most interesting for this reviewer is that Rosier’s career offers an insight into his career progression and leadership development in the RAF. Rosier’s career illustrated that it was possible for suitable short service officers to be granted a permanent commission. This had been Trenchard’s expectation when the short service scheme had been established. After the Second World War, and granted a permanent commission, Rosier followed the typical route to senior command with attendance at both the RAF Staff College in 1946 (pp.156-162) and the Imperial Defence College (IDC) in 1957 (pp. 208-214). Rosier also spent time as Directing Staff at the recently opened Joint Services Staff College between 1950-52 (pp. 186-190). However, his reminisce about his time as a student at the RAF Staff College highlights a fundamental problem with autobiographies; the issue of confusion. Rosier lamented (p. 156) that the inter-war course at the RAF Staff College had been two years. However, this is inaccurate as they were only a year. As such, we must always be careful about what an auto-biographer recollects.

Rosier’s posting from the Central Fighter Establishment (CFE), to Fighter Command as Group Captain – Plans in 1954 (pp. 200-1) also highlights the process of career management in the RAF. It highlights the influence that seniors officers had in determining someone’s career. Rosier related that he had expected a posting as Group Captain – Operations at Fighter Command. However, this had been changed to a posting to the Royal Aircraft Establishment. This was not to the liking of the AOC-in-C of Fighter Command, Air Marshal Sir Dermot Boyle, who managed to have that posting changed to that of Group Captain – Plans. This was an unexpected turn of events as Rosier had not served in a plans position up to this point in his career.

Nonetheless, it is clear that this posting was designed to give Rosier further experience of working with the other services and with allies; an essential prerequisite for senior command. Rosier recorded (p. 204) of this period as one ‘of broadening my education.’ What is more, this section of this autobiography, and that describing his time at the IDC, comes in a chapter entitled ‘Climbing to the Top.’ Indeed, after his time at Fighter Command as Group Captain – Plans, Rosier went on to be Director of Plans in the Air Ministry in 1958 after having spent time at the IDC. Again, at the Air Ministry, Rosier served under Boyle who by now was Chief of the Air Staff. Importantly, periods of service in staff positions were an essential marker in an officers rise to senior command primarily because this experience not only insured that individuals came into contact with those who could nurture and shape one’s career but also that it further developed ones understanding of the organisation that they would, potentially, one day lead.

In addition to this vital period of staff work, Rosier inter-weaved his career with significant periods as an operational fighter commander. This notably included time in North Africa during the Second World War where he was, alongside the future Air Chief Marshal Sir Kenneth Cross, a key fighter leader in the Western Desert Air Force (pp. 63-114). During this period, he was awarded the Distinguished Service Order. Indeed, except for his time at the Air Ministry and a period as Senior Air Staff Officer at Transport Command, Rosier’s career was very much tied to either fighter aircraft or Fighter Command more specifically.

Finally, and importantly, in the context of the Cold War Rosier also spent time working within the coalition system. Between 1948 and 1950 he served on an exchange tour with the recently formed United States Air Force that also included time at the US Armed Forces Staff College (pp. 171-85). Rosier also served with the Central Treaty Organisation and his final command was as the Deputy Commander-in-Chief of Allied Forces Central Europe.

In conclusion, this is a very valuable autobiography of a senior RAF officer. In addition to the critical facets discussed above this book provides an excellent insight into life in the RAF in both war and peace. It also provides some excellent insights into the important personalities of the period. For example, Rosier recalled his visit to the Soviet Union in 1956 while he was at Fighter Command. His most notable recollection (pp. 205-6) was an incident during an open-air reception at the Kremlin where both Nikolai Bulganin and Nikita Khrushchev got drunk and related in their respective speeches how much they disliked each other. This book is recommended to anyone with an interest in the RAF.

Dr Ross Mahoney is a contract Historian at the Departments of Veterans’ Affairs in Australia as well as the owner and Editor of From Balloons to Drones. He is a graduate of the University of Birmingham (MPhil and PhD) and the University of Wolverhampton (PGCE and BA). His research interests include the history of war in the twentieth and twenty-first centuries, air power and the history of air warfare, and the social and cultural history of armed forces. To date, he has published several chapters and articles, edited two books, and delivered papers on three continents. He is a member of the Royal Historical Society and a Vice-President of the Second World War Research Group. He can be found on Twitter at @airpowerhistory.

Header Image: Aircraft past and present of the Central Fighter Establishment at RAF West Raynham in October 1962, as the unit moved to RAF Binbrook in Lincolnshire. The aircraft pictured here represent the various aircraft used by the constituant organisations which merged to form the CFE. The aircraft are (left to right): Supermarine Spitfire (P5853) of the Central Fighter Establishment, English Electric Lightning F.1 (XM136) of the Air Fighting Development Squadron, Gloster Javelin, Hawker Hunter F.6 (XF515) and Hawker Hunter T.7 (XL595) both of Fighter Combat School. (Source: © IWM (RAF-T 3476))

One thought on “#BookReview – Be Bold”