#BookReview – Air and Sea Power in World War I: Combat and Experience in the Royal Flying Corps and the Royal Navy 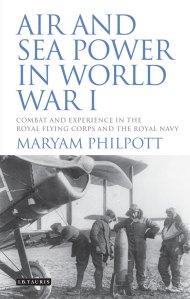 This book is something of a curate’s egg. Overlooked in favour of the experience of the British Army, Philpott suggested that the contributions of the Royal Navy and Royal Flying Corps (RFC) ‘have never been explored.’ (p. 1) However, while containing a grain of truth, this hyperbolic overstatement illustrates the first of several issues extent in this work. Primarily, these problems are its methodology and historiographical underpinnings. Furthermore, split into chapters examining training, motivation, technology, the home front, and representations of war, this book attempts too much in the space provided.

First, the comparative approach utilised has led to a light touch on both organisations considered and this choice is questionable itself. Philpott compared one service, the Royal Navy, to a branch of another, the RFC of the British Army. Technology is utilised to justify their selection; however, this alone does not provide an adequate framework for understanding experience within these organisations. While technology certainly provided an important context for their operations, they were not the sole basis of their respective cultures and any acceptance of this represents a deterministic understanding of history. Further exacerbated by the fact that Philpott attempted to compare two different organisations, the key problem here is one of cultural understanding. Philpott never really understood the cultures underpinning the organisations she is examined. The Royal Navy had a distinct culture with norms quite separate from that of the British Army. Conversely, though Philpott dismissed the importance of this (p. 2), the RFC was, to borrow a phrase from cultural analysis, a sub-culture of its larger parent organisation, the British Army. A reading of David French’s excellent study, Military Identities (2005) would have enlightened Philpott as to the British Army’s cultural idiosyncrasies. While there certainly was an attempt by RFC officers to create an organisational identity, it still owed much to its parent organisation, as does the Royal Air Force, which was a complex cultural amalgam of both the British Army and Royal Navy.

Second, at a historiographical level, Philpott did not adequately recognise the differences generated by the above distortion and made mistakes that illustrate a lack of understanding of the literature surrounding the Royal Navy and RFC. For example, Philpott described Arthur Marder as the Royal Navy’s official historian (p. 48). While the later Royal Navy may have liked to have Marder as their official historian – though he is not active until at least a decade after the production of the official history – the authors of the Service’s official history of the First World War were Sir Julian Corbett and Sir Henry Newbolt. Similarly, Philpott described the RAF’s official history as written by ‘veteran pilots’ (p. 14). While H.A. Jones served during the war and received the Military Cross, this oversimplification ignored the complicated selection process involved in choosing an official historian. Never a pilot, Sir Walter Raleigh, the RAF’s first official historian, was selected based on his literary ability and after his death, there was a long drawn out selection process to find his replacement, Jones. Philpott also ignored much of the literature concerning the Royal Navy and RFC. For example, the chapter on training as it pertains to the RFC (pp. 27-40) would have benefitted from a reading of David Jordan’s 1997 University of Birmingham PhD thesis that contained a useful section on this very subject. This spills over into the archival evidence deployed to support Philpott’s analysis. While drawing on some useful contemporary material, Philpott ignored an often overlooked source, reflective essay’s written by former RFC officers who attended the RAF Staff College at Andover during the inter-war period. These are an underused source written by the professional officers who stayed in the post-war RAF, served during the First World War, and were an attempt to by the service to develop a body of reflective knowledge concerning relevant personal experiences in numerous areas. Utilising this source would have enriched this work.

These are just some of the challenges that distort what should have been a useful addition to the growing historiography of both the Royal Navy and RFC in the First World War. Grounded in a socio-cultural framework inspired by Joanna Bourke’s An Intimate History of Killing (1999), who supervised the thesis that this book is based on, Philpott did at times offers some interesting insights. For example, the chapter on the home front (pp. 134-162) illustrated the shared experience of service personnel and civilians. However, again, in this chapter, Philpott introduced the Royal Naval Air Service (RNAS) to the story that adds a further complication regarding the comparative approach utilised. Perhaps, the comparison utilised should have been one between the RFC and the RNAS. Alternatively, while elements of the discussion provided may be useful to readers, this work might have benefitted from focussing on just one of the services considered. Moreover, if Philpott’s assertion quoted at the start of this review is correct, then it begs the question of why this was not undertaken. A gap remains for a study of either the Royal Navy or RFC from the perspective of experience and motivation that would add much to our understanding of the First World War. Once these are undertaken, a more thorough comparative approach can then be considered. This gap remains to be filled.

One thought on “#BookReview – Air and Sea Power in World War I: Combat and Experience in the Royal Flying Corps and the Royal Navy”