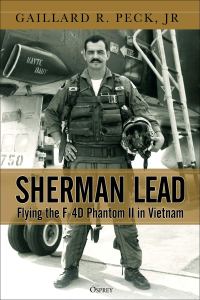 In the 1990s there was a plethora of published material on D-Day and the Second World War writ large. For example, Stephen Ambrose’s Band of Brothers was published in 1992. The service members who served during that conflict were in their 70s and sought to tell their stories. Comparatively speaking, the veterans of the Vietnam War were in their 40s at the time; however, time marches on. In 2019, we are where we were in the 1990s, but this time it is the veterans of the Vietnam War who are now in the 70s, and a fresh new wave of scholarship and memoirs are being published on that most confusing of conflicts.

Into the mix comes, Gaillard R. Peck, Jr.’s Sherman Lead: Flying the F-4D Phantom II in Vietnam. Peck admitted early on that his mission here is not to rehash politics or make sweeping judgments, ‘It is not my intent to go into details as to how the war was fought. Nor will I delve into policy.’ This book is simply, and excellently presented. It provides one pilot’s perspective, through his own window on the world about his time flying during the Vietnam War. Peck’s work joins other recent accounts including David R. Honodel’s The Phantom Vietnam War (2018) and Terry L. Thorsen’s Phantom in the Sky (2019), as well as Dan Pederson’s TOP GUN: An American Story (2019).

Readers might recognise Peck’s name as he was also one of the commanders of the famed MiG-flying Red Eagles squadron and author of America’s Secret MiG Squadron: The Red Eagles of Project CONSTANT PEG (2012) that was also published by Osprey. Peck now turns his attention to his time as a young pilot flying and fighting in the F-4 Phantom II in 1968-1969. ‘Evil’ as he has been known to generations of fighter-pilots at Nellis Air Force Base has decided to add prolific writer to an already fantastic resume. Peck is something of a legend in the US Air Force’s Fighter community, as he has been a staple at the F-15 and F-22 Weapon’s School for decades.

Sherman Lead is ostensibly about flying the F-4 in combat, but this work is much richer than just that. Peck included the social side of life for American aircrews flying out of Thailand, something missing in other works. Peck also deftly included aspects of flying left out of so many books. This included the process and importance of mid-air refuelling, a nice tip of the hat to the tanker community.

The book generally follows his training progression, from learning to not only flying fighters but also how to employ them. Peck also deftly demonstrated how the training at an air-to-ground gunnery range was accomplished as well as the physics and geometry of putting bombs on a target. By using both the training environment as well as his experiences employing munitions in North Vietnam, Laos, and Cambodia, the reader gets the sense that there is a genuine difference between precision-guided munitions and the precision-employment of munitions. Peck adroitly described all of these without being overly technical; thus the book can be enjoyed by the professional and the enthusiast alike.

Of course, the real effort of the book is to be found in his operations flying out of Ubon Royal Thai Air Base, Thailand and his missions over North Vietnam as part of Operation ROLLING THUNDER or over Laos as part of Operation STEEL TIGER. Perhaps the most significant contribution Peck has made to our understanding of the Vietnam War is that this is a dual ‘biography’ in that it is a memoir of himself, but it is also the biography of the F-4 Phantom II. This book is as much about how the war changed man as it is about how the war changed the machine.

Sherman Lead is destined to join the other classic memoirs on air power in Vietnam, including Jack Broughton’s Thud Ridge (1969) and Rick Newman and Don Shepperd’s Bury Us Upside Down (2006). Historians of air power and the history of the US Air Force will especially enjoy this book, but it will also find a wider audience in those seeking to understand individual and unique perspectives on America’s participation in the war in Vietnam.

Dr Brian Laslie is a US Air Force Historian and currently the Deputy Command Historian at North American Aerospace Defense Command (NORAD) and United States Northern Command (USNORTHCOM). A 2001 graduate of The Citadel and a historian of air power studies, he received his PhD from Kansas State University in 2013. His first book The Air Force Way of War (2015) was selected for the Chief of Staff of the Air Force’s and the Royal Air Force’s Chief of the Air Staff professional reading lists. His recently published Architect of Air Power: General Laurence S. Kuter and the Birth of the US Air Force.  He lives in Colorado Springs. He can be found on Twitter at @BrianLaslie.

Header Image: An image of an F-4 Phantom II being refuelled during Operation ROLLING THUNDER. Aerial refuelling permitted tactical aircraft to operate in the northern part of North Vietnam, something noted in Peck’s memoir. (Source: National Museum of the United States Air Force)