Editorial Note: In this Research Note, Assistant Editor, Dr Brian Laslie reflects on his contribution to a new volume about military professionalism entitled Redefining the Modern Military: The Intersection of Profession and Ethics that has been edited by Ty Mayfield and Nathan Finney and published by Naval Institute Press.

In the Summer of 2015, I packed up some clothes and (a lot of) books and moved down to Montgomery, Alabama to attend the United States Air Force’s (USAF) Air Command and Staff College (ACSC). I had been selected along with about a dozen other civilians to attend the 10-month course. I looked upon those ten months in front of me as something of a sabbatical and a chance to research and write. 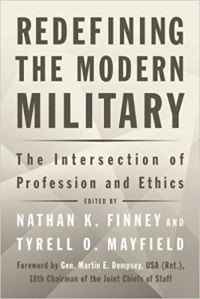 On the back end of my time at ACSC, I received a call from Ty Mayfield, of The Strategy Bridge, about a book project he and a team of authors were working on. This forthcoming project, Redefining the Modern Military: The Intersection of Profession and Ethics, published by the phenomenal people at Naval Institute Press, was an effort by the team at The Strategy Bridge to push the ball forward on the discussion of professionalism, ethics, civil-military relations, and professional education in the modern U.S. military. Following in the footstep of Samuel Huntington, Ty and co-editor Nate Finney collected chapters from a group including international and American officers as well as six academics holding both college and professional military education (PME) positions. It was a robust group, especially considering that most of the chapter authors only knew each other through Twitter. It turns out, Ty and Nate had covered all of their bases except one. In the end, they had no one writing about the USAF, the air domain, or the Airmen’s perspective. Thus, the phone call to me.

It turns out Ty and Nate decided to reach out to me at a somewhat fortuitous time. Ty asked me if I had any thoughts about professionalism and the USAF. As a current student at a PME institution who had spent the better part of seven months pouring over USAF history, I had plenty to say. I titled my chapter, ‘Born of Insubordination: Culture, Professionalism, and Identity in the Air Arm,’ and I am somewhat taciturn that my chapter contribution turned into something of “Oh and ANOTHER THING!” ranting about problems of USAF PME and the Air Force writ large. Ty and Nate did not see it that way.

What I produced, at least the way Ty and Nate ended up describing it was a chapter about the:

particularities inherent in the air arm of the U.S. military. Born from a culture of insubordination, Laslie describes three case studies that display how the positive aspects of this trait, one he titles “pragmatic professionalism”, has shaped – and will continue to shape – the Air Force. Using a historical lens to show the USAF’s unique history, identity, and culture Laslie uses these contemporary case studies to demonstrate that while the Air Force has long suffered with an internal identity crisis amongst its officer corps, the “stovepipes” that developed over the course of the past 70 years are actually conduits for professional advancement in different career fields and not something that needs to torn down.

My chapter on the USAF is but one of twelve. Other chapters include: ‘Questioning Military Professionalism,’ by Pauline Shanks-Kaurin, ‘Professionals Know When to Break the Rules,’ by H.M. ‘Mike’ Denny, ‘Ethical Requirements of the Profession: Obligations of the Profession, the Professional, and the Client,’ by Rebecca Johnson, plus eight others as well as an introduction and conclusion from the editors.

The book proper opens with:

[t]he challenging task of self-assessment for the military profession going into the twenty-first century. Crafted by military officers with recent experience in modern wars, academics who have trained and educated this generation of combatants, and lawyers and civilians who serve side by side with the defense enterprise at all levels, this volume seeks to begin the process of reevaluation for the 21st century.’

While discussing professionalism is not our usual milieu here at From Balloons to Drones, we have been known to stray into the realm from time to time; for example, see our recent post on John Boyd. Indeed, we believe that self-examination in any organisation is an essential part of development and Mayfield, and Finney should be commended for seeing this project through to publication. (We would encourage anyone interested in writing about issues related to professionalism within the context of air arms – air force, naval or army – to get in contact. Ed.)

In the age of social media, we have an entire generation of company and field grade officers who are taking their professional military education into their own hands. Through mediums like The Strategy Bridge, the Military Writer’s Guild and From Balloons to Drones, younger officers are studying and communicating about their profession in new ways. Ty and Nate seized on this moment to produce, what I hope, is a book that will generate discussion across the services and the military establishment at large. My contribution is modest, but this book surely has something for everyone.  From company grade officers to flag and general officers, I hope it will do what it sets out to do, which is nothing less than ‘Redefine’ the modern military.

Dr Brian Laslie is a US Air Force Historian and currently the Deputy Command Historian at North American Aerospace Defense Command (NORAD) and United States Northern Command (USNORTHCOM). He is an Assistant Editor at From Balloons to Drones and a 2001 graduate of The Citadel and a historian of air power studies. He received his Masters’ from Auburn University Montgomery in 2006 and his PhD from Kansas State University in 2013. He is the author of Architect of Air Power: General Laurence S. Kuter and the Birth of the US Air Force (2017) and The Air Force Way of War (2015). The latter book was selected for the Chief of Staff of the Air Force’s 2016 professional reading list and the 2017 RAF Chief of the Air Staff’s reading list. He can be found on Twitter at @BrianLaslie.

Header Image: A flight of Aggressor F-15 Eagles and F-16 Fighting Falcons fly in formation, 5 June 2008, over the Nevada Test and Training Ranges. The jets are assigned to the 64th and 65th Aggressor Squadrons at Nellis Air Force Base. (Source: US Department of Defense)

One thought on “#ResearchNote – Redefining the Modern Military: An Airman’s Perspective”