#BookReview – A Long Voyage to the Moon: The Life of Naval Aviator and Apollo 17 Astronaut Ron Evans 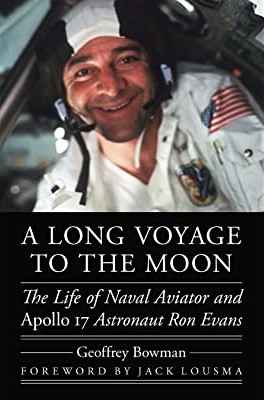 Ronald E. Evans is not a household name. Names such as Alan Shepard, Gus Grissom, and Neil Armstrong remain more or less recognisable to the wider society. Indeed, even later Apollo astronauts, such as Pete Conrad, Alan Bean, Jim Lovell, or John Young, might still trigger images or recognition to a particular generation or those interested in the history of space flight. However, Evans has been significantly overlooked. That is what being the last person to do something will get you: obscurity. Evans was a member of Apollo 17, the last crewed mission to the moon. As such, he was the last Command Module Pilot to fly as part of the Apollo program. Evans also holds several other auspicious accolades. He holds the record for the most time spent in lunar orbit; he was the last man to orbit the moon alone and was the last man to conduct a deep space extravehicular activity. Indeed, Evans was one of only three individuals to have ever done a deep space extravehicular activity. In addition, he remains one of only 24 individuals to ever journey beyond Earth’s orbit into deep space and travel to another celestial body.

After reading the above, it should be apparent that being the last person to do something does not mean your name should end in relative obscurity, placed in a footnote, or known only to those with a passion for all things space. The omission of an Evans biography has finally been corrected by author Geoffrey Bowman and his recent book A Long Voyage to the Moon: The Life of Naval Aviator and Apollo 17 Astronaut Ron Evans which comes out of the University Press of Nebraska stables as part of their absolutely stellar Outward Odyssey Series.

Bowman successfully highlights the contributions of Evans to the US Navy as he flew missions over North Vietnam before his selection to NASA and his steady progression as a member of various support crews and backup Command Module Pilot on Apollo 14 before landing in a prime spot as the Command Module Pilot for Apollo 17. Moreover, Evans is unique among the Apollo astronauts as the only ‘moon man’ and Vietnam combat veteran. Throughout the narrative, Bowman pulls together the words and remembrances of Evans’ fellow astronauts and the astronaut wives. The use of the recollections of astronaut’s wives is something missing in older histories of the Apollo program. One of the primary contributors to Bowman’s research was a series of interviews with Evan’s wife Jan, and the author makes excellent use of her perspective throughout the narrative. That being said, when Bowman settles into Evan’s training for and flying Apollo, the author’s ability takes flight. Bowman proves he is much more comfortable with who Evans is and his contributions to the Apollo program.

Much like Evans himself, Bowman has worked doggedly to produce this history, and the author and press should be proud of the result. However, as a historian more bent toward academic endnotes, the lack of sourcing continues to be a problem in an otherwise magnificent series. While the Outward Odyssey series is the single best multi-volume series on the complete history of crewed spaceflight, it is sometimes frustrating not to know where a particular quote came from, but that is a relatively minor gripe. As I own all the books in this series, it has clearly not stopped me from continuing to purchase these books.

Ultimately, this work will appeal to those who simply cannot read enough about the history of crewed space flight. We should all be thankful that Bowman has written this book and shined a light on this historic aviator and space traveller.

Dr Brian Laslie is an Air Force Historian and currently the Command Historian at the United States Air Force Academy. A 2001 graduate of The Citadel and a historian of air and space power studies, he received his PhD from Kansas State University in 2013. His first book, The Air Force Way of War (2015), was selected for the Chief of Staff of the Air Force’s and the Royal Air Force’s Chief of the Air Staff professional reading lists. He is also the author of several books on air force and air power history. He lives in Colorado Springs. He can be found on Twitter at @BrianLaslie.

2 thoughts on “#BookReview – A Long Voyage to the Moon: The Life of Naval Aviator and Apollo 17 Astronaut Ron Evans”