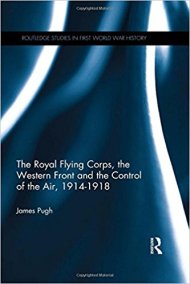 The so-called Father of the Royal Air Force Lord Hugh Trenchard looms large in the historiography of air power, perhaps most infamously for his assertion – seemingly wrought out of thin air – that the moral effect of air power outweighed the material by a factor of twenty to one. To many students of air power, this statement epitomises how much the interwar pursuit of strategic bombardment rested on flights of fancy more than carefully reasoned analysis of the lessons of the First World War because airmen like Trenchard intended to have a moral effect on civilian populations in future wars.

By contrast, James Pugh’s The Royal Flying Corps, the Western Front and the Control of the Air, 1914-1918 pushes back at a significant portion of the historiography of First World War air power concerning the Royal Flying Corps (RFC). Unlike many other scholars, Pugh insists that before the First World War, British airmen anticipated how to use air power effectively and demonstrated creativity and flexibility in applying it during the war. Pugh’s revisionist approach depends on the compelling claim that historians have teleologically read aspects of the interwar period into the First World War experience. Pugh thus wants to rescue some airmen from unfair and overwrought reputations for dogmatism (p. 52). Perhaps most importantly, Pugh seeks to validate the RFC’s overwhelmingly offensive approach as fundamentally sound while showing change over time during the war concerning offensive air strategy. Pugh argues that the offensive approach taken by airmen primarily echoed that of the ground war. Moreover, airmen shifted from seeking decisiveness to pursuing attrition and pursued more sophisticated approaches to achieving control of the air during the First World War.

Pugh’s first chapter establishes convincingly that airmen properly appreciated the importance of air superiority before the First World War. He also shows how vital missions, such as fostering battlefield communication and observing artillery fire, were anticipated before the First World War. However, limited technology and other factors impeded greater experimentation with these roles before the war (p. 33). These roles, moreover, reflected how aviators considered themselves to be part of the British Army. Their embrace of offensive thinking particularly reflected the powerful influence of British Army culture on the RFC. Pugh offers this helpful corrective in response to his belief that historians have traced the origins of airmen’s offensive proclivities too unilaterally to Trenchard (p. 14). Indeed, Pugh generally stresses the extent to which other airmen deserve more credit for developing air power thinking, continually deemphasising Trenchard (p. 51). In a similar vein, Pugh not only challenges widely held views on Trenchard’s emphasis on morale but also offers competing explanations for why the RFC stressed it so much. According to the author, the emphasis on diminishing an opponent’s morale owes much to the ‘fragility of aircraft’ (p. 24, 52). This point is not entirely convincing.

Still, Pugh argues that the RFC did not acquire ‘effective’ fighters until 1916, which were increasingly sent to the Western Front organised in squadrons responsible for different roles (p. 49). While awaiting improved aircraft, the RFC revised doctrine and improved organisational practices. When updated in 1915, RFC doctrine denoted reconnaissance as air power’s primary purpose, although it also increasingly recognised the requirement for ‘fight[ing]’ to obtain that information (p. 46), thereby placing more emphasis on controlling the air. Still, the RFC Training Manual diminished its emphasis on reconnaissance from 75 to 36% of the manual while increasing its coverage of artillery support most dramatically (p. 47).

The RFC’s views on how to control the air grew increasingly expansive, especially after learning valuable lessons about airpower employment at Verdun. Thus, the British now stressed seeking control of the air ‘far away’ from those aircraft providing direct support to the battlefield (p. 52) as well as reaffirming the importance of ‘maintaining an offensive posture’ (p. 56), which resulted in a theatre-wide emphasis as airmen sought to control the air in ‘breadth and depth’ (p. 81).

Pugh’s revisionist account largely depends on assuming the best about many of the airmen he describes, resulting in a somewhat Whiggish and rosy account of the RFC’s achievements in the First World War. Pugh valuably attempts to explode accepted thought in multiple areas. This approach is the work’s greatest benefit and failing. Regarding the extent to which airmen embraced an attrition-based strategy over the course of the war, for example, Pugh never fully makes an argument. Describing the phrase ‘relentless and incessant offensive’ as the ‘most profound evidence’ of this strategic shift ultimately falls short of proving one of the work’s key themes (p. 62). In a related vein, Pugh’s argument depends on separating out the rhetoric of airmen like Trenchard, who he claims made much of offensive air power for political reasons, meanwhile arguing that in actuality, airmen pursued an ‘increasingly nuanced and sophisticated approach to controlling the air’ (p. 71), such as using ‘concentrated and coordinated’ groups of fighters (p. 82). These contrasting interpretations cause the reader to wonder how Pugh determines when to accept evidence as rhetoric and when to accept it as representing airmen’s authentic thinking. These potential problems epitomise how Pugh is trying to do too much, such as when he mentions studies of First World War land power being importantly focused more systematically on ‘learning, transformation, or adaption’ yet preserves that approach for future airpower researchers (p. 91, 71). Using the methodology from some studies more systematically to explore British thinking about air control could offer more value.

Despite these critiques, all students of air power should read Pugh’s work for its argument-driven and revisionist analysis of the Royal Flying Corps. While adding significant complexity to widely accepted views of First World War airpower, Pugh ultimately concludes that the RFC’s offensive mindset represented the ‘most sensible course of action’ to pursue (p. 163). Even for those not necessarily interested in the RFC, his discussion of how to best employ air power will provide much of value to ponder for readers interested in any era of air power.

Dr Heather Venable is an Associate Professor in the Department of Airpower at the United States Air Force’s Air Command and Staff College. She received her PhD in Military History from Duke University. Venable’s first book, How the Few Became the Proud: Crafting the Marine Corps Mystique, 1874-1918, was published by Naval Institute Press in 2019.

Header image: A group of pilots of No. 32 Squadron RFC at Beauval in 1916. Behind them is an Airco DH.2 biplane. (Source: Wikimedia)

One thought on “#BookReview – The Royal Flying Corps, the Western Front and the Control of the Air, 1914-1918”