Editorial Note: 2021 marks the 30th anniversary of Operation DESERT STORM. To mark this anniversary, during 2021, From Balloons to Drones will be publishing a series of articles that examine various aspects of DESERT STORM’s air campaign. We will be publishing pieces throughout 2021, and if you would like to contribute to the series, please contact our Editor-in-Chief, Dr Ross Mahoney, at airpowerstudies@gmail.com or via our contact page here. The official call for submissions can be found here.

Over the coming weeks, From Balloons to Drones is pleased to be working in conjunction with the Mitchell Institute for Aerospace Studies to publish a series of articles on various aspects of the DESERT STORM air campaign. These articles were initially published as part of a Mitchell Institute of Aerospace Studies special report, Desert Storm: 30 Years Later – Lessons from the 1991 Air Campaign in the Persian Gulf War. You can download the report here.

In this latest instalment, we are pleased to present a piece by Lieutenant General David A. Deptula, USAF (Ret.) on the planning and execution of the DESERT STORM air campaign. Deptula was the principal attack planner for the air campaign, and in this article, he provides valuable insights into some of the issues and challenges that affected the conduct of the air campaign.

January 17, 2016, at 0239 Baghdad time marked the 25th anniversary of the start of Operation Desert Storm. Desert Storm was a turning point in the conduct of warfare as it set the conditions for modern warfare in five major ways: 1) it set expectations for low casualties – on both sides of the conflict; 2) it presaged precision in the application of force for all future conflicts; 3) it introduced prosecution of a combined/joint air campaign integrating all coalition/service air operations under the functional command of an airman, 4) it established desired effects as the focus of strategy and in the planning and conduct of operations, and 5) for the first time in history, airpower was used as the key force – or centerpiece – in the strategy and execution of a war.

Desert Storm was a 43-day war – airpower operated throughout the conflict from start to finish; ground forces acted as a blocking force for almost the entire war as airpower destroyed enemy forces and achieved desired effects against key systems from above. Only in the final days of the conflict were ground forces committed to combat and used to re-occupy Kuwait. In this respect, Desert Storm saw an inversion in the paradigm of traditional force application. Long-time military expert Dr Ben Lambeth has observed that today:

[t]he classic roles of airpower and land power have changed places in major combat […] Fixed-wing air power has, by now, proven itself to be far more effective than ground combat capabilities in creating the necessary conditions for rapid offensive success. 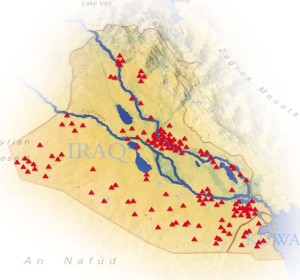 The opening attacks of Desert Storm signaled a radical departure in the conduct of war. Over 150 discrete targets – in addition to regular Iraqi Army forces and surface-to-air missile (SAM) sites – made up the master attack plan for the opening 24 hours. The war began with more targets attacked in one day than the total number of targets hit by all of the Eighth Air Force in 1942 and 1943 combined – that’s more separate targets attacked in less time than ever before in history.

Twenty-five years ago, those involved in the Desert Storm air campaign applied force not only across the entire breadth and depth of the country geographically, but also across all the key strategic and operational level centers of gravity. How was that accomplished? And what was different from previous conflicts?

Advances in technology, in conjunction with an effects-based approach to planning and execution, allowed us to institute a new concept of operations that has been described as ‘parallel’ war: the simultaneous application of force across the totality of the enemy system.

While simultaneous attack has always been a desired element of offensive warfare, it had never evolved into the parallel war demonstrated in Desert Storm for three reasons: one, the requirement for mass to compensate for a lack of precise weapons delivery; two, the large number of resources required to suppress enemy air defenses; and three, the absence of a focus on effects rather than destruction to achieve control over an opponent.

The first two challenges required technological solutions, and were simply not mature before the mid-1980s. Those two solutions were stealth and precision. To provide insight into the significance of those two elements, in the first 24 hours of Desert Storm stealth, precision, and effects-based planning allowed targeting 36 stealth aircraft armed with precision-guided munitions against more separate targets than the complete non-stealth/non-precision air and missile force launched from the entire complement of six aircraft carriers and all the other ships in the theater combined. The stealthy F-117 force flew less than 2 percent of the combat sorties, but struck over 40 percent of the fixed targets.

The leverage that stealth demonstrated in the first Gulf War is further illustrated by the following example that involves the first non-stealthy attack on one target with three aimpoints in the Basrah area – Shaiba Airfield to be exact. The attack package consisted of 4 US Navy A-6s dropping bombs, along with 4 Saudi Tornado bomb droppers: 5 US Marine EA-6Bs jamming acquisition radars; 4 US Air Force F-4Gs taking out one type of surface to air missile system; 17 US Navy F-18s taking out another; 4 F/A-18s as escort; and three drones to cause the enemy radars to radiate. That is a total of 41 aircraft – 8 dropping bombs, on 3 aimpoints, on one target.

At approximately the same time we had 20 F-117s all dropping bombs on 38 aim points on 28 separate targets. That is less than half the aircraft hitting over 12 times the number of aim points.

Stealth and precision facilitated the actualization of the third and perhaps most important component of that conflict: a concept of operations designed to achieve control over an enemy’s essential systems. This methodology recognizes that negating an adversary’s ability to operate as desired is ultimately as important – or even more so – than the destruction of the forces it relies on for conquest.

We built the air attack strategy of Desert Storm by treating Iraq and the Saddam regime as a system of systems, and designed the operation to achieve paralysis of Saddam’s strategic centers of gravity: leadership; key essential systems; infrastructure; information; and fielded military forces. The campaign had five key objectives in this regard:

These objectives were all achieved – rapidly, and decisively.  The tenets that made Desert Storm such a success were:

Today, against the Islamic State, targets selected and ordnance employed go through a lengthy vetting process, and are approved or disapproved by ground commanders. According to a reported Air Force source on 26 August 2016 it, ‘take[s] an average of between 45 to 60 days before [targets] are vetted and approved.’ That is longer than the duration of Operation Desert Storm in its entirety.  The excessive time factor in Operation Inherent Resolve target development due to of concern of unintended civilian casualties, allows critical Islamic State functions to continue to operate.  By not rapidly striking them actually countenances the Islamic State to perpetuate its terror, atrocities, and murder.

What is the morality of a policy that restricts the use of airpower to avoid the possibility of collateral damage while allowing the certainty of the Islamic State’s crimes against humanity? Members of today’s coalition should enter into their casualty avoidance calculus how many of the Islamic State’s intentional murders of innocents would be avoided by rapidly collapsing the organizational elements that allow the Islamic State to function.

The current approach to the Islamic State is gradualist – over two years to date, and the prospect of years of continuance; it is an anemic approach – an average of only 6 US strike sorties a day over the first two years of operations; and it is without definition – no comprehensive and focused strategy has been identified to achieve the stated objectives of degrading and destroying the Islamic State. The result is an approach that is fragmented, less than optimal, and yields the advantage of time to the adversary resulting in expansion and export of its deleterious effects. The enemy, over time, learns how to deal effectively with the gradual use of airpower and grows stronger, while our allies and our citizens lose interest, and our military forces – our brave airmen, soldiers, sailors, and marines – tire of the endless rotations into and out of the fight. Our present is our past: not the swift, decisive past of Desert Storm but rather the quagmire that was Vietnam.

Today’s generation of airmen must renew the spirit of innovation and creativity enabled by exploiting the virtues of operating in air and space, as did the founders of our Air Force. Those characteristics delivered success in Desert Storm, and can do so again in the future. The innovative application of the tenets of aerospace power is what made Desert Storm such a success, and can be applied to the challenge of the Islamic State. Replace the current desert ‘drizzle’ with a ‘thunderstorm’ aimed not just at the hands and feet of the Islamic State but at its head and heart as well.  It is the duty of every Air Force member to understand airpower, advocate and articulate its characteristics and capabilities, and educate those who do not understand.  For if they don’t, no one else will. The Nation deserves to hear the options allowed by airpower, and will benefit from their proper application.

Lieutenant General David A. Deptula, USAF (Ret.) is the Dean of the Mitchell Institute for Aerospace Studies. He is a world-recognized leader and pioneer in conceptualizing, planning, and executing national security operations from humanitarian relief to major combat. He was the principal attack planner for the Operation Desert Storm air campaign; commander of no-fly-zone operations over Iraq in the late 1990s; director of the air campaign over Afghanistan in 2001; twice a joint task force commander; and was the air commander for the 2005 South Asia tsunami relief operations. He served on two congressional commissions charged with outlining America’s future defence posture. He is a fighter pilot with more than 3,000 flying hours – 400 in combat – Including multiple command assignments in the F-15. His last assignment was as the Air Force’s first deputy chief of staff for intelligence, surveillance, and reconnaissance (ISR), where he transformed America’s military ISR and drone enterprises—orchestrating the largest increase in drone operations in Air Force history. He retired from the Air Force in 2010 after more than 34 years of distinguished service. He has BA and ME degrees from the University of Virginia and a MS degree from National War College. In addition to his duties as Dean of the Mitchell Institute, he is the RisnerSenior Military Scholar at the US Air Force Academy; a board member at a variety of organizations; an independent consultant; and sought after commentator around the world as a thought leader on defence, strategy, and ISR.

2 thoughts on “#DesertStorm30 – Planning and Executing the Air Campaign”