#Podcast – Beyond the Beach: An Interview with Dr Stephen Bourque

Editorial Note: From Balloons to Drones is pleased to announce our new podcast series. Led by Assistant Editor Dr Mike Hankins, the series builds on the success of From Balloons to Drones, and it provides an outlet for the presentation and evaluation of air power scholarship, the exploration of historical topics and ideas, and provides a way to reach out to both new scholars and the general public. You can find our Soundcloud channel here.

In our latest podcast, we interview Dr Stephen Bourque, author of Beyond the Beach: The Allied War Against France, to talk about the allied bombing of occupied France in 1944. Through a detailed look at local French sources, combined with official US sources, Bourque provides as thorough – and possibly controversial – assessment of General Dwight Eisenhower’s use of air power. 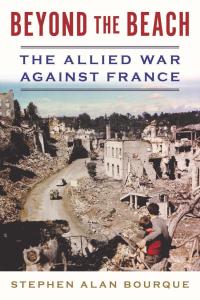 Dr Stephen A. Bourque served in the US Army for 20 years after which he obtained his PhD at Georgia State University. He has taught history at several military and civilian schools and universities, including the US Army’s School of Advanced Military Studies, and Command and General Staff College, where he is professor emeritus.

One thought on “#Podcast – Beyond the Beach: An Interview with Dr Stephen Bourque”