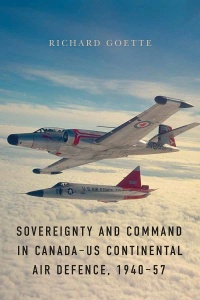 In case you missed it, the North American Aerospace Defense Command (NORAD) turned 60 this year. It was an easy thing to overlook. Most of the time when I mention that I work at NORAD, the first thing that comes to most people’s mind is that it is the organisation responsible for tracking Santa (and that is a job taken very seriously). However, the day to day focus on the command remains on the defence of the North American continent. It does so through three mission areas: aerospace warning, aerospace control and maritime warning. The most important concept to remember when discussing the history and operations of NORAD is that it is a binational command with shared responsibility between the United States and Canada.

For more than sixty years now, Americans and Canadians have bi-nationally agreed to place the defence of the homeland in each other’s hands and entrust officers from both countries with commanding, directing, and controlling forces. To that end, Richard Goette’s new work Sovereignty and Command in Canada-US Continental Air Defence, 1940-1957, looks at the development of these relationships leading up to the creation of NORAD in September of 1957. Goette is an air power academic and Canadian air force historian as well as an Associate Professor in the Department of Defense Studies at the Canadian Forces College in Toronto, where he is Deputy Chair of the Department of Military Planning and Operations.

Looking back retrospectively, it is easy to believe that a close relationship between the two nations was a foregone conclusion; it seems difficult to imagine a world in which Canada and the US would not cooperate on matters of national defence. This was indeed not the case immediately following the First World War. One of the demonstrative statements in the book comes at the beginning of Chapter Three where Goette states that ‘[I]t was by no means preordained that Canada and the US would cooperate in the defense of North America.’ Both countries had active war plans for conflict with each other. As Goette shows, ‘[C]anadian military officials continued to consider the US a potential adversary and planned accordingly.’ Likewise, America’s war plan crimson dealt with a conflict against Canada as part of a likely larger fight against Great Britain (War Plan Red) (p. 71).

Throughout the 1940s and 1950s, this planning against the border nations morphed into cooperation between the two nations and eventually into a unique agreement where the defence of the two nations was shared. Goette (p. 23) aims to demonstrate ‘how Canadian and American officers debated and negotiated doctrinal definitions of command and control as the basis of the Canada-US continental air defence relationship from 1940-1957.’ Thus, Goette’s work pairs nicely with Joseph T. Jockel’s Canada in NORAD 1957-2007: A History. The author’s thesis (p. 5) is that the struggle from the Canadian perspective ‘was not control but command: command over Canadian air defense forces was the actual “acid test of Canadian sovereignty.”’

Goette’s work is about sovereignty, particularly the sovereignty of Canada. ‘Sovereignty is a complex and contested concept without a universally accepted definition.’ (p. 27) Both countries had to find common ground and move from common conceptions of defence (working within services) towards bilateral (and later binational) defence. Nineteen-forty saw the earliest discussions held between the two nations with the US seeking both ‘strategic direction’ and ‘command,’ over Canadian forces, a clear problem for Canadian sovereignty and command of their forces. The calculus changed by the summer of 1941 and the new cooperative plan (ABC-22) saw that ‘each nation would retain strategic direction and command of its forces, which effectively recognized national sovereignty.’ More importantly, the groundwork was accomplished allowing the two nations to begin effectively working together with the goal of continental defence in mind (p. 81, 83).

The Second World War found the two nations working effectively together, and establishing relationships and procedures used during the war bore fruit in its aftermath. The post-war Basic Security Plan (BSP) was a combined effort aimed at continental defence that Goette (p. 116) shows ‘was a watershed in the Canada-US defence relationship.’ Between the acceptance of the BSP in 1946 and 1953, other plans and agreements between the two nations, particularly as they concerned cross-border intercepts strengthened the relationship between the two governments, but more importantly between the militaries. As the Cold War progressed, it became increasingly evident that the solution would be in a combined headquarters where US and Canadian personnel could work alongside each other. The problem, especially from the Canadian perspective, remained the spectre of American officers commanding Canadian forces. Interestingly, the ‘solution was avoiding the term “command” and using the principle of operational control.’ Thus, in 1957 the North American Air Defense Command (NORAD) began operations. Headed by an American four-star with a Canadian three-star deputy, each officer held ‘operational control.’ Day-to-day operations and ‘operational control’ were held by the American Commander-in-Chief NORAD, but in his absence, the Canadian Lieutenant General held control over the American officers. Administrative matters, punishment, and other matters of command remained sovereign, i.e. national and service responsibilities. This unique command structure remains in place today (p. 177).

There is really nothing to critique here, Goette has successfully produced a deeply researched work that is the first significant study of the development of Canadian-US continental defense in the post-Second World War era and, as such, it will remain the go-to book for those looking to understand the origins of this unique relationship for the foreseeable future. Sovereignty and Command will quickly find a following in the fields of history and air power studies but will also find a wide readership in the fields of political science, civil-military relations, and international relations. If you have an interest in how the homeland is defended this is a must-read and demonstrates the unique Canadian-US relationship that has stood the test of time for more than 60 years and looks to easily double that as the unique, nay special, binational relationship continues to evolve into the future.

Dr Brian Laslie is an Air Force Historian and currently the Deputy Command Historian at North American Aerospace Defense Command (NORAD) and United States Northern Command (USNORTHCOM). He is also an Assistant Editor at From Balloons to Drones. A 2001 graduate of The Citadel and a historian of air power studies, he received his PhD from Kansas State University in 2013. His first book The Air Force Way of War (2015) was selected for the Chief of Staff of the Air Force’s and the Royal Air Force’s Chief of the Air Staff professional reading lists. His recently published Architect of Air Power: General Laurence S. Kuter and the Birth of the US Air Force.  He lives in Colorado Springs. He can be found on Twitter at @BrianLaslie.

If you would like to contribute to From Balloons to Drones, then visit our submissions page here to find out how.