Editorial Note: In the next instalment of our Air War Books series, our Podcast Editor, Dr Michael Hankins, discusses the ten books that have influenced and shaped his writing as an air power historian.

Before I became a historian, I was a professional musician, and one of the most fun things that musicians do is sit around and talk about their influences. What did you listen to over the years that made you play the way that you play and compose music the way you do? The #AirWarBooks series here is a similar opportunity for us air power historians to talk about what books influenced us most. But, of course, the way any historian interrogates the past is rooted in many things, not just what books they read, but also their values, beliefs, background, and maybe even what kind of music they like.

That said, here are ten books that influenced my approach to studying and writing about air power history and technology. Not all of them are about aviation, but they shaped my approach to history in key ways. I’ll discuss the non-aviation books first:

J.E. Lendon, Soldiers and Ghosts: A History of Battle in Classical Antiquity (New Haven, CT: Yale University Press, 2006). So why is a book about Greco-Roman Warfare on my list of military aviation books? Because Lendon’s amazing work links culture and memory to the practice of warfare in specific and compelling ways. He argues that the Greeks and the Romans looked to the past – a culturally constructed, imagined past—to inform what they thought warfare should look like. I noticed some similar trends when I studied fighter pilot culture and began working on my first book, Flying Camelot. I don’t think I could have written that book without Lendon’s influence.

David Nye, America as Second Creation: Technology and Narratives of New Beginnings (Boston, MS: MIT Press, 2003). This book is not about aircraft specifically, but it is about the cultural power of technology. I’ve been deeply influenced by Nye’s examination of how specific technologies came to symbolize cultural narratives about the origins and evolution of the United States. The idea that a piece of technology could be a symbol that tells a specific story to a specific culture, almost defining their sense of identity in a way, is an idea that continues to define my own work.

Jill Lepore, The Name of War: King Philip’s War and the Origins of American Identity (New York: Vintage, 1998). There may not have been any aircraft in King Phillip’s War, but what I found so compelling about Lepore’s work here is the power of how people talk about the past. This book is less about the war and more about how it came to be remembered by the opposing sides, and how the language used to describe the past can create whole systems of meaning that shape the future. This idea, so powerfully explored here, has shaped my approach to studying later conflicts from the Korean and Vietnam Wars to the Gulf War and beyond.

Mark Clodfelter, The Limits of Air Power: The American Bombing of North Vietnam (New York: Free Press, 1989). Finally, some aeroplanes! There is a rich literature about air power in the Vietnam War, but I still think Clodfelter’s classic holds up as one of the most important. Even over 30 years later, his argument is still controversial: that strategic bombing in Vietnam was not effective, that air power, although very important, has limits. Nevertheless, his explanation and comparison of the different goals, limits, and methods of the Johnson and Nixon administrations’ approaches to bombing is still useful and insightful. Even for those who disagree with it, this book remains a giant in the field for a reason.

John Flanagan, Vietnam Above the Treetops: A Forward Air Controller Reports (New York: Praeger Publishers, 1992). There are a lot of pilot and aircrew memoirs from Vietnam, and many of them are very good. But, for some reason, Flanagan’s tale of flying O-1 Bird Dogs on the incredibly dangerous low-and-slow FAC missions in Southeast Asia has stuck with me much more than any other pilot memoirs I’ve read. Starting at the USAF Academy, Flanagan was a deeply principled man who was surprised at how the military handled itself in Vietnam. His story includes the way he wrestled with himself about the war and described in detail the brutal missions and the horrific things he saw. His story also includes a detailed look at how the US brought South Korean troops into the war – something not covered much in other works. There are many great memoirs to read, but if you can only read one, this would be my pick.

Tami Davis Biddle, Rhetoric and Reality in Air Warfare: The Evolution of British and American Ideas about Strategic Bombing, 1914-1945 (Princeton, NJ: Princeton University Press, 2004). Of all the books on bombing in the Second World War (and there are seemingly too many to count), Biddle’s work is one of the best. She highlights one of major themes in air power history: the disconnect between the promises of air power and its actual results on the battlefield. This work is a wonderful look at the evolution of an idea – how strategic bombing theory grew and changed over time, and how that idea and the assumptions that grew to accompany it influenced air power leaders on both sides of the Atlantic to interpret the air war in particular ways. This mode of analysing not only what happened, but what people thought about what happened, is something I’ve tried to carry through in my own work.

Steven Fino, Tiger Check: Automating the US Air Force Fighter Pilot in Air-to-Air Combat, 1950–1980 (Baltimore, MD: Johns Hopkins University Press, 2017). Fino’s study of the evolution of fighter pilot cockpits, detailing the F-86 Sabre, F-4 Phantom, and F-15 Eagle, is still one of my favourite histories of technology. That’s not just because it’s about three of my favourite aircraft, but because of how deftly Fino – himself a former Eagle driver – connects that technology to the people using it. He illustrates the complex interactions between human and machine in the high-stress combat situation of flying fighters, and how the culture of fighter pilots evolved along with the technology. I’ve also never seen another book be so technically detailed while remaining so accessible.

Linda Robertson, The Dream of Civilized Warfare: World War I Flying Aces and the American Imagination (Minneapolis, MN: University of Minnesota Press, 2005). As a Professor of Media as opposed to a historian, Robertson comes at this study of First World War pilots with a fresh perspective. She examines how the image of the knights of the air (inaccurate as it is) was constructed and took such a grip on the public and the flyers themselves. It’s a study of the public perception of the war and of flying and expands the literature on the First World War in interesting ways. 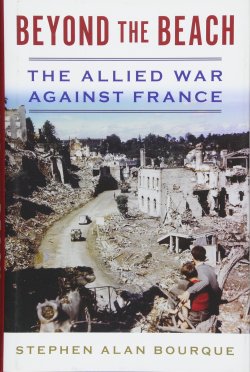 Stephen Bourque, Beyond the Beach: The Allied War Against France (Annapolis, MD: Naval Institute Press, 2018). Books about bombing during the Second World War are plenty, but few of them critique the allied effort in quite the way that Bourque does here. By travelling across France and consulting local archives, then comparing them to the official USAAF records, Bourque demonstrates the horrific true costs of the allied bombing campaign for French civilians. Almost as a companion piece to Tami Davis Biddle’s work, Bourque shows the human, emotional, and deeply personal costs of inaccurate bombing attacks, which wreaked destruction over France, killing tens of thousands of civilians. I read many books about bombing theory and doctrine, but this book makes those things real on a human level and made me look in a new way at a historical event that I thought I understood.

C.R. Anderegg, Sierra Hotel: Flying Air Force Fighters in the Decade After Vietnam (Washington DC: Air Force History and Museums Program, 2001). I’m not sure what it is about this book that keeps drawing me back. It’s a short volume about the transition from the Vietnam-era fighters like the F-4 Phantom, to the more advanced F-15 Eagle fighters of the 70s and 80s, and the suite of other changes that accompanied that shift, from more advanced air-to-air missiles like the AIM-9L to the changing nature of pilot culture, tactics, and training practices. Nevertheless, Anderegg’s approach – part history, part memoir – makes for very compelling, engaging reading about a fascinating topic. Maybe it’s that the subject matter is what my work focuses on, or maybe it’s the engaging writing style and interesting anecdotes, but I keep finding myself returning to this one again and again.

Dr Michael Hankins is the Curator for US Air Force, Navy, and Marine Corps post-World War II Aviation at the Smithsonian National Air and Space Museum and the author of Flying Camelot: The F-15, the F-16, and the Weaponization of Fighter Pilot Nostalgia (2021). He is a former Professor of Strategy at the USAF Air Command and Staff College eSchool, and former Instructor of Military History at the US Air Force Academy. He earned his PhD in history from Kansas State University in 2018 and his master’s in history from the University of North Texas in 2013. He has a web page here and can be found on Twitter at @hankinstien.