#BookReview – How the War Was Won: Air-Sea Power and Allied Victory in World War II 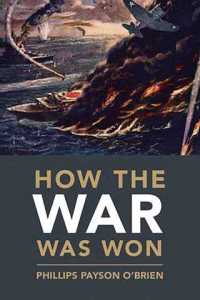 The Second World War is known for its decisive battles. The Battle of Britain, the Battle of Stalingrad, the Battle of Midway, and the Battle of Normandy are among the most popular. However, what if there was no such thing as a decisive battle in the greatest conflict in human history? This is what Dr. Phillips Payson O’Brien of the University of Glasgow argues in How the War Was Won: Air-Sea Power and Allied Victory in World War II, a monograph in the making for at least a decade and a half.

O’Brien seeks to contest the now standard argument that the Soviet Union bore the brunt of the German onslaught. The Red Army broke the back of German power while the Western Allies played a relatively modest role according to this view. This is one of the main themes in Richard Overy’s Why the Allies Won, a well-reputed study of the war from the mid-1990s. Western access to Russian archives emerged as the Cold War ended. Overy and other scholars took the opportunity to learn more about the war from Russia’s perspective. What emerged was a significant criticism of Western scholarship for downplaying the USSR’s role in the victory over Nazi Germany.

O’Brien’s analysis turns this thinking on its head. Those who laud the Soviet contribution do so within a paradigm that understands the contribution to victory through manpower. O’Brien cannot deny that the USSR engaged a larger percentage of the Wehrmacht than the Western Allies. His argument is that the Second World War was primarily a mechanized war. The production and destruction of equipment are what decided the war in spite of the human cost of 70 million dead (civilians included).

Air and sea power allowed for the most efficient destruction of Axis equipment. This destruction could be achieved in three phases. ‘Pre-production’ destruction prevented the Germans and Japanese from producing weaponry in the first place by damaging factories and destroying or preventing the arrival of raw materials. ‘Production’ destruction meant destroying equipment as it was being assembled in the factories. ‘Deployment’ destruction refers to equipment lost as it was in transit from assembly plants to the front lines. The Western Allies – mainly Great Britain and the United States – were primarily responsible for these equipment losses. The Russians did not maintain a very large navy, nor did they invest in many large, four-engined bombers to strike at the German economy.

The great land battles were not decisive. The incredible attrition sustained by the German and Japanese war machines on a daily basis was decisive. O’Brien’s argument is that this super-battlefield of air and sea weaponry mattered most. Few battles were decisive regarding equipment destroyed. German AFV losses at the Battle of Kursk, commonly lauded as the greatest tank battle of the war, were a meagre 0.2 percent of German armaments production in 1943; German AFV losses at the great British victory at El Alamein were a paltry 0.1 percent of 1942 armaments production. O’Brien does note an exception to this: the Battle of Midway. At that near-decisive naval engagement, the Imperial Japanese Navy lost four aircraft carriers, vessels that could not be replaced for some years. Consequently, it is little surprise that an image of Japanese carriers under attack at Midway graces the cover of the book.

O’Brien does leave some unanswered questions. He does not discuss the role – real or imagined – of initiative in the conflict. Battles are often considered decisive, not only for the casualties or equipment losses they incurred but for their role in shifting perceptions of how the war was going. His assessments of certain Eighth Air Force raids over Germany in 1943 may also be open to some criticism. He notes the efficiency of the air-sea war, but the losses sustained on these raids were anything but efficient. More salient to my research is his mixed treatment of the Mediterranean Theatre of Operations. O’Brien acknowledges the significant attrition imposed on Axis air forces there but laments that this was not a more integral part of the Allied strategy. He opposes the Allied decision to focus on the Mediterranean in 1943 instead of mounting the invasion of France.

How the War Was Won is an excellent read for those interested in how the interaction between production, logistics, and combat decided the war against Germany and Japan. This is its greatest contribution to the Second World War’s expansive historiography.

Alexander Fitzgerald-Black completed his MA thesis, ‘Eagles over Husky: The Allied Air Forces and the Sicilian Campaign, 14 May to 17 August 1943,’ with The Gregg Centre for the Study of War and Society, University of New Brunswick in 2014. He is in the process of turning this work into a manuscript for publication with Helion & Company. Alex lives with his wife in Moncton, Canada. He operates his own blog at alexfitzblack.wordpress.com and can be reached on Twitter @AlexFitzBlack.