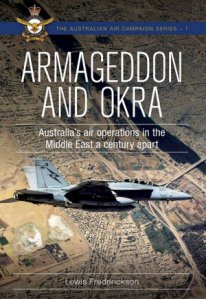 Armageddon and OKRA is the first in a planned series about the Royal Australian Air Force’s (RAAF) air campaigns being compiled as part of the RAAF’s 100th-anniversary celebrations. The RAAF’s Chief of Air Force (CAF) intends for the series’ works to be ‘readable, well-illustrated, educative and enduring’ (p. 3). In the main, Armageddon and OKRA ably meets these ambitions.

The book though carries additional burdens in aiming not just to market the RAAF to the Australian public but also to contribute to the Air Force’s professional military education and be of interest to serious academic researchers. It would be difficult for any work to satisfy such a diverse audience completely. Given this split, this review discusses Armageddon and OKRA from both a reader’s viewpoint and a military organisational perspective.

Armageddon and OKRA is split into two main parts. Part one examines Australian air power during the First World War in the Middle East between 1915 and 1919. The principal focus is on the operations of No.1 Squadron of the Australian Flying Corps (AFC) during the British capture of Palestine and Syria from the Ottoman Turks in 1917-1918. ‘Armageddon’ in the title refers to the Battle of Megiddo in late September 1918 in which the No. 1 Squadron fought. This English language word comes from the Ancient Greek name for Mount Megiddo, subsequently used in the Christian Bible’s Old Testament.

Part two then moves forward a hundred years to 2014-2018 and the US-led coalition operations to support the Iraqi Government to defeat Islamic State (ISIS). Part two’s principal focus is the small RAAF Air Task Group deployed for this task as part of the larger Australian Defence Force’s Operation OKRA, and which involved (amongst others) No.1 Squadron again. This is a rather elegant symmetry that perhaps was not made as much use of as could have been.

The involvement of the RAAF and its predecessor, the AFC in these two periods was at the tactical level of war and accordingly, the book’s main focus centres around squadron operations. Part one provides a comprehensive overview that nicely relates the tactical to the strategic level, the air activities undertaken, the various aircraft Australian’s were trained on and flew in operations, maintenance aspects and the air-to-air and air-to-ground weapons used. In this part, No.1 Squadron’s use of the Bristol F.2b Fighter in 1918 features prominently, including the destruction of a large Turkish ground force that the unit trapped in the Wadi Fara gorge. Also notable is the attention paid to including the opposing German squadrons, particularly FA300, and how they impacted No.1 Squadron. Wars involve two sides, however; many histories overlook this interdependence.

Part two is somewhat different. Early on, there is a detailed examination of the command-and-control arrangements for OKRA. The naming protocols are quite arcane for the casual reader, not unsurprisingly as their origin lies in the demands of automated messaging systems not in easy human comprehension. This then moves into several short chapters that discuss the daily air operations as seen at the squadron-level by OKRA’s deployed air units. These units flew the F/A-18 ‘Classic’ Hornet fighter/bomber, the F/A-18F Super Hornet fighter/bomber, the E-7A Wedgetail airborne warning and control aircraft and the KC-30A air-to-air refuelling tanker.

By the time the reader reaches these final chapters, it is apparent that CAF’s aims to be ‘readable, well-illustrated, educative and enduring’ has been achieved. In Australia, the book is keenly priced while its excellent line drawings of aircraft and numerous photographs add to the overall appeal. Some may argue over ‘enduring,’ however, the second part of the book offers a level of detail of the RAAF’s part in OKRA that is presently unequalled. In particular, future historians of these air operations will value this book because it gives the reader an insight into the rhythm and grind of daily squadron life during operations.

On the other hand, in meeting CAF’s other dictum, the book falls a bit short for the professional or academic reader. It is not – nor was intended to be – a critical analysis of the RAAF’s air operations in these two periods. The book dwells on the positives and only rarely and rather briefly notes any possible negatives. There are also reoccurring lapses into hagiography. Of the two parts of the book, the second is the most impacted. There is room left for a definitive, comprehensive history of the RAAF during OKRA.

In thinking about future works, the elegant symmetry of parts one and two was noted earlier. In reading the book, the more critical reader might like to assess the similarities and differences between No.1 Squadron operating as part of the British Empire and then 100 years operating as part of the American ‘empire’. In the First World War, No. 1 Squadron and Australians were more broadly considered part of the British Empire; they were simply English people born offshore. It is unsurprising the future Air Marshal Sir Richard Williams, later the ‘father of the RAAF,’ ended the war commanding in battle the Royal Air Force’s 40 Wing, which was overwhelming a British entity.

During OKRA, there is a much greater separation between the Americans and their foreign air force partners; the later provide tactical level forces to use as the US determines. However, through its astute alliance management process, the American empire has shaped foreign air forces to be fully and immediately interoperable with US forces regarding doctrine, equipment, support, and training. In contrast, in the British Empire’s war, Australia provided people to Britain who needed to be trained, equipped and, later in battle, logistically supported. For Australian’s, the British Empire was more collegiate, but the modern-day American one is arguably shrewder. Armageddon and Okra’s author, Lewis Frederickson, has written a fine, relevant analysis on Australia’s First World War experience for those wishing to explore such issues further.[1]

Finally, it is worth discussing the book from a military organisational perspective. The book’s forward sets out CAF’s intentions for the series. These are not just laudable but noteworthy in breaking from the last 20 years of RAAF development. In these earlier periods, RAAF and other Australian Service chiefs stressed teamwork, and especially loyalty, over critical thinking.[2] This is a recognised problem for small professional military forces which lack the scale to be able to be ‘broad churches’ that can include disruptors.[3] In this series, and in his new Air Force Strategy, CAF now appears interested in setting off down this path.[4] If so, later books will need to be more analytical, including engaging in constructive criticism. It is uncertain if this will be possible or acceptable.

Armageddon and Okra is an excellent value read that makes a useful contribution to RAAF history. It is particularly important and valuable in breaking new ground on the RAAF’s participation in OKRA against ISIS. Overall Armageddon and Okra will be of interest to the general public, military enthusiasts and undergraduates undertaking strategic studies courses.

Dr Peter Layton is a Visiting Fellow at the Griffith Asia Institute, Griffith University and a RUSI (UK) Associate Fellow. His PhD is in grand strategy, and he has taught on this at the US National Defense University. Author of the book Grand Strategy, his posts, articles and papers may be read here. He was also once a navigator on No.1 Squadron RAAF flying F-111Cs.

Header Image: Centenary tail art on a  F/A-18F Super Hornet of No. 1 Squadron RAAF at the main air operating base in the Middle East Region during Operatyion OKRA. (Source: ADF)

[1] Lewis Frederickson, ‘The Development of Australian Infantry on the Western Front 1916-1918: An Imperial model of training, tactics and technology’ (PhD Thesis, UNSW Canberra, 2015)