#BookReview – Wonders All Around: The Incredible True Story of Astronaut Bruce McCandless II and the First Untethered Flight in Space 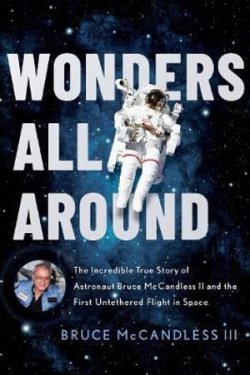 It is a picture that seems to hang somewhere in every elementary school and library in America. For that late Gen-X group born in the last half of the 1970s, it hung on the walls of our bedrooms next to baseball heroes Dale Murphy and Mike Schmidt. Space Historian Emily Carney has dubbed it simply ‘the poster.’ The image is so ubiquitous as to be almost forgettable, not because it is forgettable but because you see it everywhere: from museum walls to commercials. It is inescapable. It is easily as memorable as any photograph that came out of America’s early space program, and it remains one of NASA’s most requested pictures. The image is of an untethered astronaut floating alone in the blackness of space, feet dangling above a blue and white Earth. Even as I write this review, a version of the famed photo hangs in my office, a hand-painted copy by my oldest daughter, herself a budding STEM and space lover.

The astronaut in the photograph is Bruce McCandless II, hardly a household name; but you have heard his voice, and you have seen his face in the old B-rolls of the floor of mission control where he served as a CAPCOM (capsule communicator) on the Apollo 10, 11 and 14 missions. McCandless served as CAPCOM for the first lunar extravehicular activity (EVA), and said “Okay, Neil, we can see you coming down the ladder now.”

Hardly a household name, yet he was at the epicentre for two seismic events in the history of crewed spaceflight: the first steps on the moon and the man behind the mask in the first untethered EVA. That untethered EVA and his first ride into space was a long time in coming. Half of his astronaut class flew to the moon, including Jack Swigert, Al Worden, Stu Roosa, Ron Evans, and Ken Mattingly as Command Module Pilots, while classmates Edgar Mitchell and Charlie Duke walked on the surface of the moon. Fred Haise served as the Lunar Module Pilot for the ill-fated Apollo 13 mission, another of McCandless’s astronaut class. Much of his class served on Skylab, the Apollo-Soyuz Test Project, and the early shuttle flights.

McCandless, and classmate Don Lind, was considered more a scientist than a pilot in his astronaut class. This undoubtedly hurt him in crew rotation and mission assignments. One need look no further than Astronaut Walter Cunningham’s book, The All-American Boys, to know that Deke Slayton did not look favourably on anyone who was not a test pilot. Cunningham aptly noted:

If an astronaut had been in space, he was a star. If he was on a crew, he was a prospect. If he was not yet in line, he was simply a suspect. He hadn’t really made the team. (Cunningham, p. 84).

Cunningham also noted that amongst all astronauts, ‘At the very bottom of the pile were the hyphenated astronauts, the scientists’ (Cunningham, p. 87). McCandless II almost became the astronaut the world forgot despite his presence in the famous photo.

In his new book Wonders All Around: The Incredible True Story of Astronaut Bruce McCandless II and the First Untethered Flight in Space, this omission is being corrected by his son, Bruce McCandless III. This book focuses on the astronauts of the Apollo era who doggedly hung on at NASA through the early Space Shuttle program. Also unusual is that Wonders all Around is the third book to either be authored or co-authored by a son or daughter of the Mercury, Gemini, and Apollo Astronauts, the others being Rosemary Roosa’s To the Moon: An Autobiography of an Apollo Astronaut’s Daughter, and Kris Stover’s For Spacious Skies, written with her father Scott Carpenter. All three bring a different perspective to the golden age of spaceflight.

The author traces the early journeys of his father but does not fall into the trap of taking too long to tell it. For Bruce McCandless, ‘the real joys of his life: reading, thinking, and engineering.’ This demonstrates that McCandless II was a man at home inside the cockpit and a textbook (p. 40). McCandless’ selection to NASA might not have come with a rapid assignment to a flight, but it did place him in the middle of the action, most notably with his selection serving as a CAPCOM. The author notes this assignment came with a bit of a letdown when he states:

It’s like being the backup quarterback who relays plays from the sidelines; you’re part of the action, but no one’s going to remember you after the game. (p. 62).

Nevertheless, McCandless II soldiered on through Apollo, Skylab, and Apollo-Soyuz, all without a flight assignment and grimly hung on through the intervening years waiting for the shuttle to come online. McCandless endured, and he could be seen ‘wandering the halls of Building 4, haunted by the ghosts of cancelled Apollo missions,’ even as newer generations of astronauts began to take their place in line for shuttle assignments (p. 134).

McCandless III sets about telling his father’s story and the societal, political, and cultural events that occurred along the way. He also delves into the family life of McCandless II at home, and, in this case, ‘dad’ comes across as a work-at-home, distant, slightly standoffish figure, that many in my generation can identify with.

Wonders all Around is the perfect transition book for those looking into the late-1970s lean years as NASA moved from the Saturn V to the Space Transport System. McCandless III notes that his dad was part of the transition from the all-male, test pilot atmosphere to the shuttle era’s more inclusive and scientific period. McCandless was there to see it all, still hoping for his first rocket launch and all along the way continuing his work on the piece of machinery that would solidify his place in the history of photography: the Manned Maneuvering Unit (MMU).

Of course, the book inevitably leads to McCandless’ first flight, his piloting of the MMU up to 300+ feet from the Space Shuttle Challenger in 1984, and ‘Hoot’ Gibson taking the now-iconic photo, but neither of the McCandless’s story ends there. Instead, McCandless II continued to stick it out at Houston and flew one more time on a possibly more famous mission, STS-31, which deployed the Hubble Space Telescope (I would be remiss here if I did not recommend Astronaut Kathryn Sullivan’s magnificent biography Handprints on Hubble).

As new and forthcoming astronaut biographies continue to be published each year, our understanding of NASA as an organization continues to grow as well. McCandless III’s biography of his father adds to our understanding. McCandless II clearly had the ‘Right Stuff,’ but he had more than enough of the ‘Scientific Stuff’ to make him a legendary astronaut, and this biography cements the name of McCandless alongside Shepard, Armstrong, and Ride.

McCandless II said of that famous photo that “I have the sun visor down, so you can’t see my face, and that means it could be anybody in there. It’s sort of a representation not of Bruce McCandless, but mankind.”[1] That may be true, but the author has lifted that visor and allowed the sun to shine on the face of his father at last. Wonders All Around is a powerful biography, history, and love letter to an organization, an event, a photograph, and an individual.

Dr Brian Laslie is a US Air Force Historian and currently the Deputy Command Historian at North American Aerospace Defense Command (NORAD) and United States Northern Command (USNORTHCOM). He is also the Book Reviews Editor here at From Balloons to Drones. A 2001 graduate of The Citadel and a historian of air power studies, he received his Masters’ from Auburn University Montgomery in 2006 and his PhD from Kansas State University in 2013. He is the author of Architect of Air Power: General Laurence S. Kuter and the Birth of the US Air Force (2017) and The Air Force Way of War (2015). The latter book was selected for the Chief of Staff of the Air Force’s 2016 professional reading list and the 2017 RAF Chief of the Air Staff’s reading list. He can be found on Twitter at @BrianLaslie.

Header image: Astronaut Bruce McCandless, II tests a the manned maneuvering unit during a test involving the trunion pin attachment device he carries and the shuttle pallet satellite (SPAS-01A), partially visible at bottom of the frame. The space shuttle Challenger was flying with its aft end aimed toward the Earth. (Source: Wikimedia)