“For you the war is (not) over”: Active Disruption in the Barbed Wire Battleground

The popular perception of the prisoner of war is that, once captured, he was out of the battle. Rather than compliantly accepting a status of hors de combat, however, many captive allied airmen in Europe during the Second World War continued to be potent military operatives in a new theatre of conflict—the barbed wire battleground. Indeed, the airmen adopted a stance as prison camp combatants. To facilitate this, they actively managed their lives to demonstrate individual and collective agency. They strenuously mitigated the ill-effects of their circumstances by embarking on a program of active disruption. Importantly, they did not give in to, what at least one man termed, ‘the futility of existence’.[2]

Drawing on personal records in private and public collections, as well as official reports, this article provides a brief overview of some of the ways in which Australians and their fellow prisoners in Stalag Luft III, a Luftwaffe prisoner of war camp, established, maintained and promoted themselves as active airmen, on duty, in the barbed wire battleground.

Many downed airmen spoke of the ‘shock’ of captivity and the shame they felt on capture.[3] These feelings were a common response to being taken from battle.[4] The airmen’s sense of disgrace was exacerbated when they heard the ‘usual taunt’, ‘für sie der Krieg is beendet’—‘for you the war is over’.[5] The realisation after their unwilling departure from the aerial arena that they had become prisoners of war was a serious blow to self-esteem and service pride.[6] However, rather than accept a situation defined by passivity and docility, they rejected it.[7] The war was not over for them. Moreover, so, they remained on active service as prison camp combatants.

However, before they re-attained operational readiness, they had to regain their fighting spirit. Humour was a significant means to that end as well as an almost universal morale booster.[8] Many, for instance, depicted their new accommodation as a holiday camp or sanatorium,[9] and tongues were firmly in cheek when they poked fun of the ignominious exits that landed them there.[10] Many illustrated themselves as Donald Duck behind bars.[11] ‘Winglessness’, like that of ‘Downed Donald’, was a shared state and the men gained strength through ridiculing their common plight.[12]

The armed forces have a long tradition of using language to distance themselves from the emotions associated with military action and death in service.[13] The men of Stalag Luft III were no different, and so, they too gained strength through language. While they were initially bemused at being called Terrorflieger, Luftgangster, and Terrorbomber, many filled their wartime logbooks with clippings from German newspapers that promoted Allied airmen as the Second World War version of terrorists.[14] In doing so, the downed airmen recognised that the propagandised terms highlighted their success. Consequently, they ignored the intended insults and willingly accepted—as tributes to their military prowess—their new designations.[15]

The airmen were not, however, so keen to be known as Kriegsgefangener—war prisoner—because of the negative and shameful connotations surrounding the word ‘prisoner’ and its associated trappings, such as POW number, fingerprinting, and identification discs.[16] Accordingly, they spurned ‘prisoner of war’. In a canny example of linguistic reframing, they adopted the easier-to-pronounce and linguistically distancing abbreviation of ‘kriegie’—even those who were captured in the later months of the war.[17] Derived from the first syllable—the German word for ‘war’—it subconsciously indicated that they were still men of war with a fine fighting spirit and distanced them from the stigma of captivity. ‘Kriegie’ removed the sense of derogation surrounding captivity and turned an affront—and assault to their dignity—into a linguistic badge of inclusiveness and pride. ‘Kriegie’ declared that they were still men of war on operational service. It also became ‘a fun word’ to describe them.[18] Ultimately, their prison camp patois—terrorflieger, Luftgangster, kriegie and so on—became a language of agency and defiance.

With self-esteem restored, confidence reasserted, and fighting spirit reinvigorated, the airmen turned to discipline and their strong sense of service duty to help negotiate captivity. Demonstrating collective agency, the kriegies institutionalised air force discipline in the camp.[19] They acknowledged that running Stalag Luft III along RAF station lines was best for the community—for the camp commonweal—and it was generally agreed that the senior officers ‘did an excellent job’.[20] As well as maintaining ‘a high degree of morale and discipline’,[21] there was much security in adhering to the familiar aspects of their former service lives.[22] Moreover, it afforded the airmen the support they needed to wage war as prison camp combatants.

One aspect of that war was the duty of active resistance. All new arrivals were interviewed by the Senior British Officer or, in the NCO compound, the Man of Confidence, who reminded the kriegie new boys of their continuing obligations as servicemen.[23] Importantly, they warned them not to comply with any German order ‘beyond what was necessary’.[24] The airmen welcomed their new responsibility of active resistance and defiance. Exemplifying personal and group agency they were deliberately disruptive.[25] They misbehaved during roll call.[26] They purloined German supplies.[27] They bribed guards.[28] Their favourite sport became goon-baiting.[29] Many embarked on covert operations. Some became code writers and sent secret messages to MI-9.[30] A major aspect of active resistance was escape, and the airmen embraced their moral right[31] and duty[32] to break out of the prison camp. If they were not on the exit list for a particular attempt, or not personally eager—or even physically or psychologically capable—they supported those who were by participating in the communal effort. 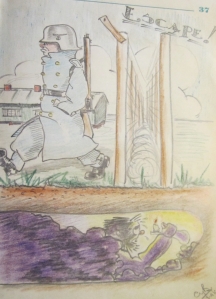 Active resistance, disruption, defiance, and escape work epitomised individual and collective agency. Significantly, they reinforced the airmen’s continuing identity as combatants. For many, such concerted agency ameliorated the mortification of becoming prisoners of war. Moreover, so, the escape or ‘X’ organisation became the overriding feature of life in Stalag Luft III.[33]

Each compound had its version of the ‘X’ organisation and Australians participated in almost every aspect of its work. ‘X’ rosters were drawn up disguised as participant lists for sports days, and sporty types created diversions.[34] The carpentry department commandeered bed boards to shore up the tunnels and other purposes and built cabinets and hidey holes to stow secret equipment.[35] Some men did metal work, made dummy rifles, and meticulously constructed compasses.[36] Scroungers obtained ink, radio parts and essential supplies.[37] Photographers took passport photographs.[38] Forgers replicated passes and identification papers.[39] Tunnellers dug, others carted dirt away, and gardeners disposed of it. Meanwhile, the majority joined the army of ‘watchers’ known as ‘stooges’, who kept a lookout for any sign of the Germans. So industrious were the tunnellers that, in East Compound alone, between 60 and 70 tunnels were started during the first six months.[40]

Despite such diligent ‘X’ work and prolific excavation, East Compound’s only successful getaway was that of October 1943—dubbed ‘the Wooden Horse’—where three men made a ‘home run’. The culmination of North Compound’s ‘X’ work was the mass breakout of March 1944. While seventy-six succeeded in fleeing the camp, only three made it home. Seventy-three were recaptured. Fifty were executed, five of whom were Australian.

The men regretted the tragic outcome, but not their part in it. Nor their determined demonstration of collective agency as prison camp combatants. They believed their large-scale resistance work had been worthwhile, not just because of the sustaining effect on morale, but because of the cost to the Germans in tying up resources during the ensuing Großfahndung which they considered ‘biggest manhunt of the war’.[41] 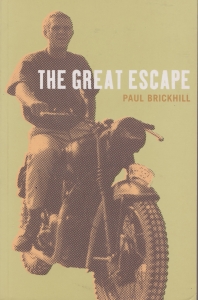 After the war, Paul Brickhill, an Australian journalist and former Stalag Luft III kriegie, was invited to write a book about the March 1944 escape.[42] That book proved influential in how captivity in Stalag Luft III has been portrayed. The mass breakout, for example, was not known as the ‘Great Escape’ until the publication of Brickhill’s The Great Escape in 1951.[43] From that time, the book’s title entered the lexicon as participants, bystanders and the public all appropriated it to describe an event that still resonates. So powerful is the book’s theme of triumph over the enemy through a communal agency, so exciting is the narrative, that most commercially published accounts of life in Second World War German POW camps—and Stalag Luft III in particular—feature the exciting high adventure and derring-do of major escapes.

While many of the former airmen were impressed with Brickhill’s book, many were not overly pleased with John Sturges’ 1963 film. They begrudge it the Americans, the motorbike, a truly appalling Australian accent, and other factual inaccuracies inserted in the interests of ‘good cinema’.[44] Despite their distaste, the film, along with Brickhill’s book, has left a substantial legacy which they, their descendants and popular culture have embraced.

They frame captivity in Stalag Luft III as an action-packed success story. They reinforce the kriegies’ personal and collective agency as active airmen, on operational service, in the barbed wire battleground. They deny any perception of passive, docile, humiliated prisoners of war. Just as the airmen themselves had done when they refused to accept that the war, for them, was over.

Kristen Alexander is a PhD candidate at the University of New South Wales, Canberra, researching the responses to captivity of Australian airmen prisoners of Stalag Luft III and their families. Specialising in Australian aviation history, she is published in Australia, Great Britain and Japan. She won the non-fiction category of the 2015 ACT Writing and Publishing Award and was highly commended in the 2014 and 2017 awards. Her books were included on the RAAF Chief of Air Force’s 2010 and 2015 reading lists. Her military essays won the Military Historical Society of Australia’s 2012 and 2013 Sabretache Writers Prizes. Her website can be found here and she is on Twitter as @kristenauthor.

[1] This article is based on a paper presented at the Don’t Drown Post Graduate Conference, UNSW Canberra, 4 October 2017, which was a shorter version of that given at Aviation Cultures Mark III Conference, University of Sydney, 27–29 April 2017.

[4] Aaron Pegram, ‘Bold Bids for Freedom: Escape and Australian Prisoners of Germany, 1916–18’ in Joan Beaumont, Lachlan Grant, and Aaron Pegram (eds.), Beyond Surrender: Australian Prisoners of War in the Twentieth Century (Carlton: Melbourne University Press, 2015), p. 25; Kate Ariotti, ‘Coping with Captivity: Australian POWs of the Turks and the Impact of Imprisonment during the First World War’ (PhD Thesis, The University of Queensland, 2014), pp. 55–57; Karl James, ‘“I hope you are not too ashamed of me”: Prisoners in the siege of Tobruk’, in Beaumont, Grant, and Pegram (eds.), Beyond Surrender, pp. 101–102; Adrian Gilbert, POW: Allied Prisoners in Europe 1939–1945 (London: John Murray, 2007), p. 41.

[32] Air Publication 1548, Instructions and Guide to All Officers and Airmen of the Royal Air Force regarding Precautions to be Taken in the Event of Falling into the Hands of an Enemy, ([no publication details], 2nd Edition, June 1941). The duty was rescinded after the Great Escape but was still implied. Air Publication 1548, The Responsibilities of a Prisoner of War, (3rd Edition, April 1944), <http://www.ibiblio.org/hyperwar/UN/UK/RAF/POW-RAF/&gt; (accessed 14 December 2017). British and Australian soldiers had a similar, formal, obligation to escape. James, ‘“I hope you are not too ashamed of me” in Beaumont, Grant, and Pegram (eds.), Beyond Surrender, p. 110.

[42] Paul Brickhill, The Great Escape (London: Faber and Faber, 1951). A section on the mass escape was included in the earlier publication, Brickhill and Norton, Escape to Danger.

11 thoughts on ““For you the war is (not) over”: Active Disruption in the Barbed Wire Battleground”